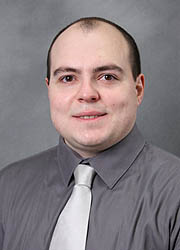 
(A note to prospective students.)

Dr. Christov received his Ph.D. in Engineering Sciences & Applied Mathematics from Northwestern University in 2011. Subsequently, he was awarded a highly-selective NSF Mathematical Sciences Postdoctoral Research Fellowship and spent two years with the Complex Fluids Group at Princeton University. In 2013, Dr. Christov was selected as the Richard P. Feynman Distinguished Postdoctoral Fellow in Theory and Computing at the Center for Nonlinear Studies at Los Alamos National Laboratory. Since 2016, he has been an Assistant Professor of Mechanical Engineering at Purdue University directing the Transport: Modeling, Numerics & Theory laboratory, where advanced mathematics is combined with state-of-the-art simulations to make progress on fundamental questions at the interface of engineering, mathematics, and physics. In 2017, Dr. Christov was recognized via a Doctoral New Investigator award from the American Chemical Society’s Petroleum Research Fund. His research has also been continuously supported by the National Science Foundation.

Dr. Christov’s detailed mathematical analyses of complex engineering flow problems has yielded new predictive theories and rationalized poorly understood experiments across several areas of science and engineering, ranging from flow and mixing of complex fluids, to microscale fluid–structure interactions, to interfacial instabilities, and nonlinear mechanical waves. He publishes and disseminates his work widely: 75 journal papers (39 while at Purdue). His works have made significant impact on the scientific community, as demonstrated by their rate of citation (see Google Scholar). In 2020, Dr. Christov was recognized by the American Physical Society as an Outstanding Referee (a lifetime achievement award), becoming only the fifth Purdue faculty to ever receive this honor. Dr. Christov's impact as a teacher-scholar is also evidenced by the success of his mentees and group alumni, who nominated him for the Outstanding Faculty Mentor of Engineering Graduate Students in Mechanical Engineering award for which he was selected in 2021.